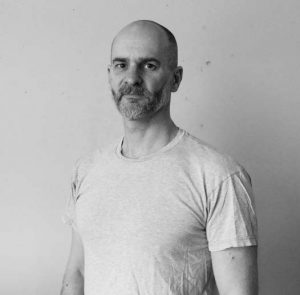 Clive Smith was educated as an artist first in the U.K. at Kingston Polytechnic and then at the Art Students League in New York City, where he has resided since 1988. His work is held in several public collections, including the Cleveland Museum of Art, Kemper Museum of Contemporary Art, and the National Portrait Gallery in London. The Ulrich acquired his piece Miró Thrush in 2019. Smith is a painter whose work possesses a high degree of naturalism, which he has brought both to psychologically-incisive portraiture and, more recently, still-lives. In his two recent series, Transgenic Bouquets and Speculative Birds of America and Europe, he imagines and brings to life in vivid detail things that do not yet exist: plants that bear on a single stem flowers from wildly different species, or birds cross-bred with works of art. Miró Thrush belongs to the latter. Smith’s works are visual embodiments of speculative fiction that take contemporary realities—in this case, current biotechnologies—as a starting point and project their possibilities forward, asking in the process what humanity stands to gain and lose in such possible futures. This program is exclusively for Salon Circle members. Click here to learn more about Salon Circle.